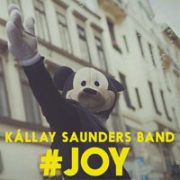 SINGLE *JOY*
Kallay Saunders Band is back with a stunning new single entitled Joy. The Hungarian pop star Andras Kallay Saunders, who has shown his talent 2014 to Europe at Eurovision Song Contest No.5 ranking with his single Running has formed his band 2015 and released his debut album Delivery Boy. With two Top 10 Hits behind he reentered this years local ESC contest with Who We are and went to final. Now he is back with a great-fresh summer tune „Joy“, that was written on the request of the worldwide-known woman lifestyle magazin Joy. That will use this song as the background music of its whole summer tv campaign. Joy has been written by Andras Kallay Saunders, Adam Toth and producer Sean Darin. “

CAREER
In 2011, Kállay Saunders‘ professional career came to the forefront, when he decided to spend time with his grandmother and mother, in their home countries of Hungary. During his visit, he noticed a Tv commercial urging talented singers to audition for the nations talent competition and rose up to the challenge, to the point of finishing fourth in the competition. Shortly after finishing the competition, Kalláy Saunders signed a deal with Universal Hungary, where he then decided to permanently live in Hungary. Since then, Kalláy Saunders has released nine singles that have made the Hungarian Top 40 billboards each time, peaking at number one and no lower than number 7, all of which, being written and sung by Kalláy Saunders himself. In 2014, Kalláy Saunders represented Hungary, in the highest of honor, in the Eurovision Song Contest. He would showcase his song, „Running,“ where he would place 5th out of 37 qualifying countries in the competition. While there, Kalláy Saunders won the ESC RADIO AWARDS (peoples choice) for Best Male Artist and Best Song of Eurovision. That year, he would also win an award for, Song of the Year, in Hungary. In 2015, Kalláy Saunders decided to continue his career by creating a band, known as, Kalláy Saunders Band (KSB). Since then, the band has released their first album, „Delivery Boy“, with two hit singles coming off that album, „Victory“ and „Young“ peaking at number 2 and 4 on the Hungarian Top 40 chart respectively. The album would also reach number 1 on Deezer. Earlier this year KSB opened for Emeli Sandé and will be opening for James Arthur last November.

Kalláy Saunders Band, brings a combination of RnB, Rock, Pop, Blues and Soul mixed into one. Kalláy Saunders and the member of his band, believe in hardworking dedication to convey their love and passion for music to the audience, where the people can feel and share that passion, at every concert.