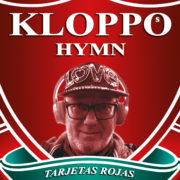 KLOPPOsHYMN
is created as our homage to Jürgen Klopp (Liverpool FC).
The days before the Champions-League-Final 2019, Mani Augustin Keller was for Studio-Recordings in Madrid to produce his upcoming album.

After his Studio-Sessions he strolled around talking to the Liverpool-Fans and as well to all the soccer-fans having a good time in Madrid these days, and they all enthusiastically explained to him, that Jürgen Klopp is currently the absolut best soccer-team-manager.

Inspired by this positiv energy, this respect and appreciation they all paid to Klopp’s performance, Mani Augustin Keller started to create his tribute to Klopp, Mr. Normal One.

On the flow of the moment he invited spontaneously his band TARJETAS ROJAS for the following week to recordings at the famous Parrstreet-Studios in Liverpool, where they started to produce KLOPPO’s HYMN. They finished the tune at the legendary Musigrama-Studio Madrid, owned by famous spanish Producer Paco Ortega.