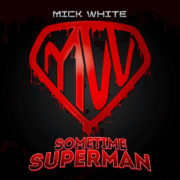 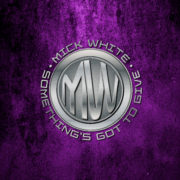 The story so far,.. As a one time member of Samson and First Strike Mick White had played most of the UK’s premier venues at the age of eighteen. He’d supported Iron Maiden on their mammoth UK trek for the Somewhere In Time tour as well as tours and high profile supports with amongst others Uriah Heep, Giant, Dare, Slaughter and Shy plus also had a wealth of writing and recording experience for someone so young. Like many musicians of the time the Grunge movement that came in the early nineties found White struggling to fit in with the new sound and so a move to studio and session work was preferred. As the rock scene moved further underground as we entered the new millennium White found no interest in where it was heading and drifted away from the music scene.

Following the reissue of the Samson album 1988 and the release of the First Strike album Just Another night in 2019 White decided to reignite his singing career and record the solo album he had been planning for a number of years. Enlisting the talents of guitarist Luke Hatton and drummer/producer Carsten Enghardt work began on the writing for the album Something’s Got To Give. White and Hatton quickly found they had a natural songwriting partnership and alongside a handful of reworked songs from White’s back catalogue the album was soon written and ready to record.

Due to the world pandemic all the parts were recorded remotely with the vocals, guitars, bass and keyboards recorded in the UK and drums were then added in Germany where it was also mixed and mastered by Enghardt and Ulrich Hilbel.

The album has a mix of styles ranging from eighties classic rock to power metal to AOR but the production and sound is very contemporary. The first single Emergency On Planet Earth came out in October 2021 with an accompanying video shot by James Ross Heron from Carriage Returns Media which has been viewed over thirty thousand times across social media and has also been a huge streaming hit especially in Germany. This was followed by second single Sometime Superman in February 2022 with another striking video from Heron which also introduced bass player Ian Edwards who is now part of the Mick White Band live set up.

The band played its first live show in March showcasing the whole album to a packed out Station in Cannock and the set was received very enthusiastically. Following the release of the album on 29th April 2022 through Enghardt Media/EDEL the band returned to the Station for a launch party on 1st May to another packed out audience.

With a number of high profile supports booked and dates being scheduled in Germany for later in the year the band will now take the album out on the road throughout 2022 and 2023.

The album „Something’s Got to Give“ is released since 13th of May 2022 via Edel Records.

„Mick White is a very decent singer of gravelly velvet voice and a definite ear for decent tune. I can’t wait to see where this goes next. Its definitely for fans who like their rock music with lashings of leg warmers, bleached jeans and built on the foundations of NWOBHM. Are you ready to rock? Then get your arse into gear and buy this album.“ (7.5 /10)

The Ghost And The Machine – Alice in Contraland
Nach oben scrollen